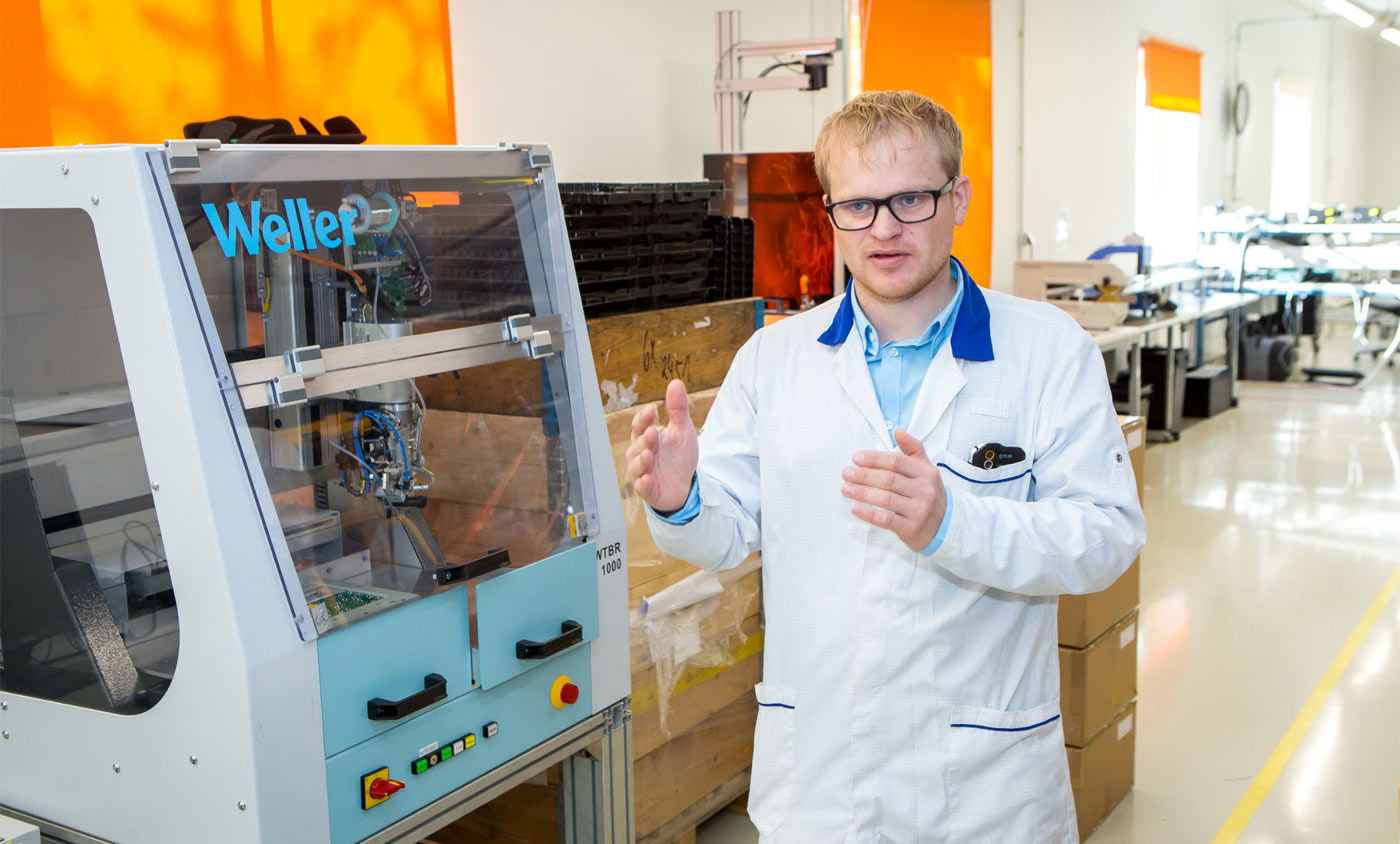 EXCELLENT ROBOT: According to Hendrik Reeg, the new plant is also in the process of setting up a new soldering robot, which will help to further improve the quality of production.

A year ago, Tepcomp OÜ, a professional in the electronics industry in Kuressaare, came up against the wall. Although the desire was to increase the amount of work, it was no longer possible at that time.

Until that time, the electronics manufacturing and specialized LED technology industry moved across the Saaremaa Dairy Industry across Pikk Street, then this year it has been operating at Pihtla tee 43, where Volex Estonia OÜ, the last manufacturer of harnesses, was located.

The move to a new rental space, according to industry leader Hendrik Reeg, was done purely because the old premises remained narrow. The new factory building works on as many as three floors. ”Right now, we could double our production in this house, and that’s the plan we had when we came here,” Reek admitted. ”The old place was in front of the wall, nothing more was possible.”

According to Reegel, the old factory building had about 60 employees and 650 m² of production space. ”Think about yourself – the warehouse, the equipment, and about ten squares for each person,” said the plant manager. Pihtla Road has more than half the area and currently employs 65 people. ”In the long run, we want twice as many people to work here. And I think it could be in five years.”

The number of unemployed people in Saaremaa has increased recently. According to Statistics Estonia, in August this year 90 people were registered as unemployed than in the previous year. As of August 31 last year, there were 490 unemployed in the county, compared to 580 this year. Merinvest, a rubber parts factory, certainly contributed to the redundancy of 40 employees.

Tepcomp itself expanded from Finland to Saaremaa five years ago. It was free at that time, with plenty of skilled labor, and made it easy to find workers.

”The Unemployment Insurance Fund really shows that the free labor force has been growing again lately,” Reek admitted. However, Tepcomp is not currently looking for new employees. Yet they are asking for jobs, and quite a few of those who have been laid off by Merinvest are among them. ”We haven’t had a problem finding people. I’ve heard that there are problems elsewhere, but we really have no problems,” Reek asserted. ”We have recruited some new employees already in the autumn, but not yet massively.” Thus, the industry is planning to increase its workforce from next year.

This year, a new place has been devoted to getting along with work. The job has not been interrupted for a day due to moving. Both moved and produced in parallel, but now everything is in place.

In order to make the work more efficient, the factory has also purchased additional production equipment. One major investment concerns the upgrade of the surface mount production line, which now enables Tepcompil to produce ultra-long LED boards. Conventional devices do not have the technical support to make such products, Reek admitted. ”We have made special changes throughout the line so we can produce them,” he said.

Also, a brand new soldering robot has recently been purchased to help improve production quality. Although the robot has been ”hired”, it has not reduced the need for real staff, Reek asserted. ”The robot has just been purchased and is in the process of being rolled out,” said the plant manager.

”Fortunately, nothing replaces man, especially in our production niche.”

According to Reg, Tepcomp produces slightly more sophisticated products and smaller batches than any of their competitors. ”No one else in Saaremaa is likely to do such precise and subtle soldering,” Reek said. At the same time, the robot improves the quality of their production, because not all workers would be able to solder the details exactly as the machine would. ”Quality is fixed,” confirmed Hendrik Reek.